It is best time to invest in CDA sector I-15 Islamabad. It is located near Kashmir Highway leading to Airport. Prices are reasonable at the moment as sector is not developed yet and CDA is going to start development  soon. It has two sizes 5 marla (25×50) and 7 marla (30×60) available. 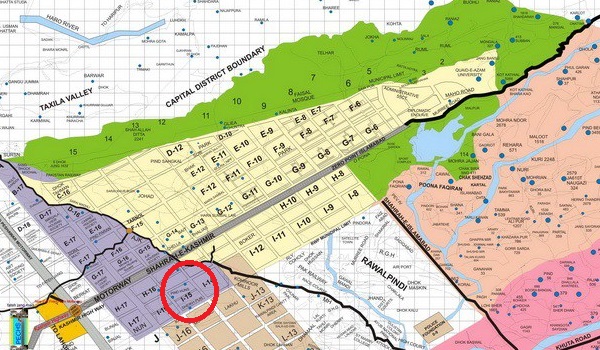 CDA OPENED FINANCIAL BIDS FOR DEVELOPMENT WORK IN SECTOR I-15:

Islamabad: May 1, 2020: Capital Development Authority (CDA) has opened financial bids for first phase of development work in sector I-15. Work would be awarded to lowest bidding firm after approval from competent authority. Instructions have been issued to complete codal formalities at fast pace so that initiation of development activities on the first phase could be started immediately. CDA has reiterated its commitment to revive sector development and within one year not only PC-1 was approved but development work will be starting within few days on this project which was stuck for last fifteen years.

After completing pre-qualification process, directions were issued for immediate issuance of NITs for the first phase of development which was issued accordingly. The received financial bids have been opened earlier this week and approval from competent authority is being solicited for acceptance of bids and award of contract to lowest bidding firm. The qualified firm would carry out complete infrastructure development including road infrastructure, drainage, sewerage, water supply, electrification and other amenities of phase 1.

Instructions have been issued to complete the further process at earliest so that initiation of development works in sector I-15 could be ensured at earliest. The development of this sector would help add to the housing stock available in the city as well as the country. Roughly over 10,290 units of different categories will eventually be created here once entire process is completed.

Islamabad: October 20, 2019: Capital Development Authority (CDA) has finally paved the way to start developmental works in sector I-15. Pre-qualification of contractors for the infrastructure development of sectorI-15 has been invited.

Basically, I series sectors were designed to provide low-income housing but remained stalled for years. In February 2000, it was resolved to develop sector I-15 to overcome the ever increase in shortage of housing in the capital. The sector was particularly launched to accommodate low income citizens. However, despite the allotment of plots no step regarding its development was taken since nearly two decades. The incumbent management of CDA in line with its policy to take up the initiation of development work in the stalled sectors, which were previously victim of stalemate. Sector I-15 was designed exclusively for low-income citizens in 2005. It has 10,290 plots and the CDA has taken possession of entire sector’s land.

Sector I-15 was launched in 2005, and officially inaugurated by PM Yousuf Raza Gillani. Initially, 5600 residential plots of 5 and 8 marla sizes, and 8000 flats were sold to general public. Later on, due to some design changes and cost escalation, CDA announced policy to allot residential plots in lieu of flats in sector I-15 or refund paid amount to the allottees of flats. CDA managed to refund money to about 4000 allottees, while remaining 4000 were given 5 marla residential plots in lieu of their flats.
Authority, re-designed the plan, structural designs and infrastructure of entire Sector I-15 for the various categories plots.

In order to streamline and resolving the project hurdles and issues, CDA requested the Pakistan Environmental Protection Agency (PEPA)’ for Environmental Approval and invited all stakeholders to weigh in on the environmental concerns mentioned in an Environmental Impact Assessment (EIA) report. Public hearing of Interested and affected persons was held on August 19, 2019 and CDA is ensured optimistically that PEPA would issued shortly NOC in this regard.