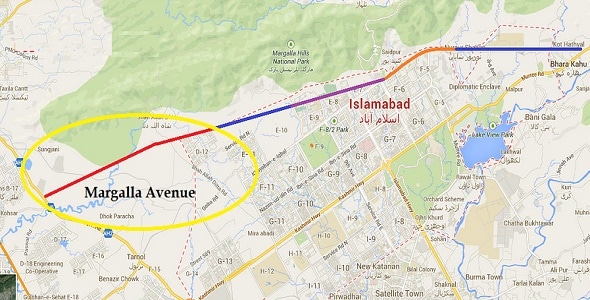 ISLAMABAD    –   The Capital Development Authority (CDA) has decided to go for fresh tender to complete the stalled Margalla Avenue project.

Originally, Margalla Avenue was planned to be started from GT Road passing alongside the Margalla Hills, then run backside of the red zone and then to join the Murree Road at Bhara Kahu Jugi stop.

Initiated under political pressure and having poor planning, the Margalla Avenue is stalled since last six years due to its dispute with the contractor.

A meeting in this regard was held at the CDA headquarter in which it has been decided to end the on-going dispute with the contractor and in the meantime also start preparing to complete the said project through new contractor. When contacted, the Member Engineering Ayaz Khan informed that the authority has decided to prepare the PC-II for the Margalla Avenue project and complete it through fresh tendering to engage a new contractor.

He said we are trying to settle the dispute with the old contractor as well because he went to the court. The project was envisioned as a bypass for commuters heading towards Murree and Kashmir from the GT Road while it could also reduce the traffic load on Kashmir Highway. A nine kilometre portion of Margalla Avenue was started in 2012 with a deadline to complete in June 2013. However, it remains unfinished apparently due to disinterest on part of the city managers. The project was mainly delayed when CDA remained unable to get cleared its alignment on certain portions. The poor planning of this project can be measured from the fact that the CDA was unable to build a portion of the road near Shah Allah Ditta due to a centuries old graveyard, a shrine and the alignment of the road was unclear.

According to senior officers of the engineering wing of CDA, the city managers should have cleared the alignment before the project began, but the authority initiated it in haste. Resultantly, the nine kilometre road between the GT Road and D-12 has remained incomplete, with 51 per cent of the work finished. The official said a 2km portion of Margalla Road north of Constitution Avenue towards Bari Imam has already been built but has been abandoned for years because some of the work remains unfinished.

CDA officials said one of the main reasons for the delay in the completion of Margalla Avenue between the GT Road and D-12 is a dispute between the contractor and the CDA. When work was stopped a few years ago, the contractor had filed a case against the CDA arguing that the CDA was responsible for clearing the land for the construction of the road and should therefore pay the contractor. The CDA has claimed the contract was cancelled for other technical reasons. A court arbitrator fined the CDA Rs170 million, which the authority challenged in the Islamabad High Court.

The CDA awarded Rs588m contract for the project – 21 per cent below its estimated cost – but CDA officials said it was started in haste due to political pressure before necessary steps, such as land acquisition in some pockets of alignments, were completed.

The CDA had proposed changing the alignment of the road in an area where there was a bottleneck a few years ago, but sources said no serious efforts were made to remove the hindrance.

Will Margalla Avenue Be A Game Changer For Islamabad Real Estate?