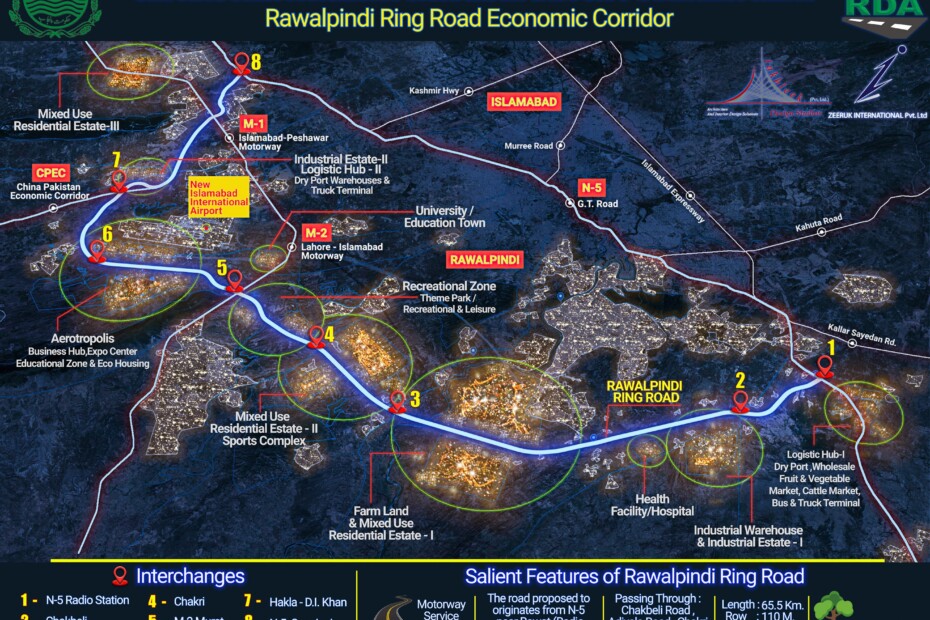 Final plan of the Rawalpindi Ring Road Project Economic Corridor (RRPEC) is released on Tuesday, October 6, 2020, after approval.In the final plan, 10 new commercial and residential zones have been added to the project such as a dry port equipped with modern facilities, a well-equipped hospital, and an international expo center, fruit and vegetable markets, goods and public transport terminals, and cattle markets.

65.6 kilometer (km) long Ring Road will have six lanes on each side and service roads would be constructed along the main road while RDA would plant 0.15 million saplings on the entire route of the signal-free corridor.

The project will be connected with city with interchanges at eight different locations while residential zones would be established along four interchanges. A hospital is also included in the plan for the project, which will be built near Chak Beli Interchange, while the planned amusement park would be constructed between Chakri and Morat interchanges.

Rawalpindi Development Authority (RDA) on Wednesday approved setting up of economic zones along Ring Road which will be controlled by the civic body’s zoning regulations.

This was decided at the 49th governing body meeting of the RDA which was presided over by its chairman Tariq Mehmood Murtaza.

Though the Punjab government has yet to start the process to procure land for the proposed Ring Road Project, the RDA governing body declared the area along the Ring Road as city limits.

Under the plan, Punjab government will execute the project through Lahore Ring Road Authority instead of Rawalpindi Development Authority. It has already notified Rawalpindi’s commissioner as project director.

Zones will be controlled by the civic body’s regulations

A formal notification for setting up of the economic zones will be issued by the Punjab government.

Future construction activities within these zones would be controlled in accordance with the principles of town planning and zoning regulations, the governing body said.

The project will be LDA-style and for this purpose governing body has made a five-member technical committee under the supervision of MPA Latasub Satti.

The committee will compile its report on the acquisition of land for RDA City project and other matters within fifteen days.

A short-term consultancy was also approved for this housing project to prepare a feasibility report aimed at identifying location suitable for the construction of RDA City.

The RDA director general presented each agenda before the governing body. Agenda items in detail were approved after questions and answers from various members.

Feasibility study for construction of metropolis zone along with New Islamabad Airport was also approved.

Besides this, hiring of a survey company was also approved which would determine encroachments along Leh Expressway.

Approval was also given to construct buildings on RDA approved commercial roads in accordance with the new building bye-laws so that the construction industry could flourish.

Wasa Managing Director Raja Shaukat Mehmood submitted TORs for the services of a private company for recovery of WASA arrears which were also approved by the Governing Body.

Sports allowance like LDA was also approved for employees of RDA and Wasa.

Addressing a meeting in Lahore on Saturday, the chief minister said that the provincial government will provide all possible support and facilities for completion of Ring Road project.

A comprehensive business model is also being prepared for the promotion of public-private partnerships in the health sector.

The 65.8km ring road will start from Radio Pakistan Rawat N-5 and terminate at Sangjani N-5. Construction of Special Economic Zones (SEZs), including industrial, educational, recreational, medical health, residential and aerotropolis etc is a key component of the RRR. 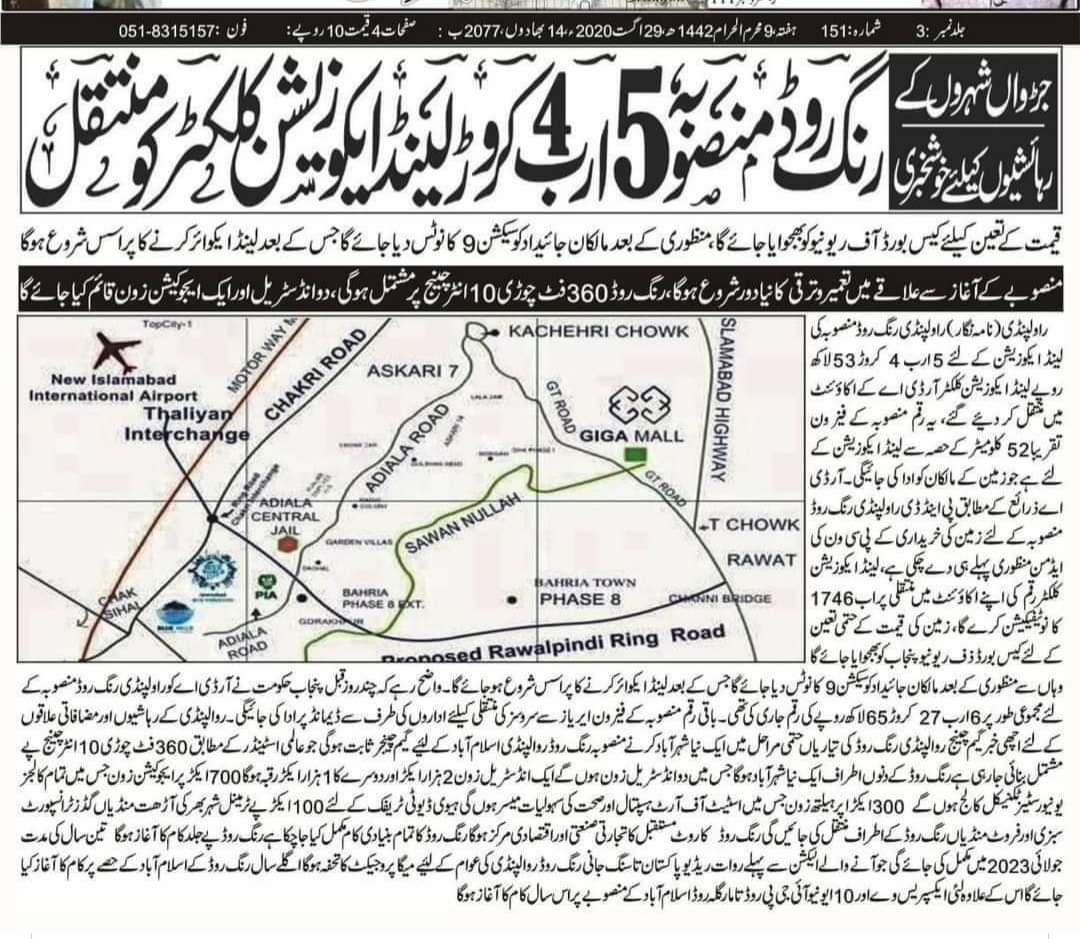 Rawalpindi: The Punjab Finance Department has approved funds worth PKR 6.3 billion to acquire land for the development of the 51-kilometre-long Rawalpindi Ring Road (RRR)’s right-of-way (ROW), according to a news source published on August 19. The process will be initiated once the requisite amount has been transferred to the land acquisition collector’s account.

Reportedly, the Punjab Private Public Partnership Authority had already approved the PC-I for the RRR land acquisition. Now, the Punjab Government is expected to issue the official notification for land acquisition for the project. The land will be acquired under the venture’s first phase, which includes the development of the 51-kilometre-long and 110 metre wide ROW that will link the Radio Pakistan Building in Rawat on GT Road with the China-Pakistan Economic (CPEC) Route in Fateh Jang. 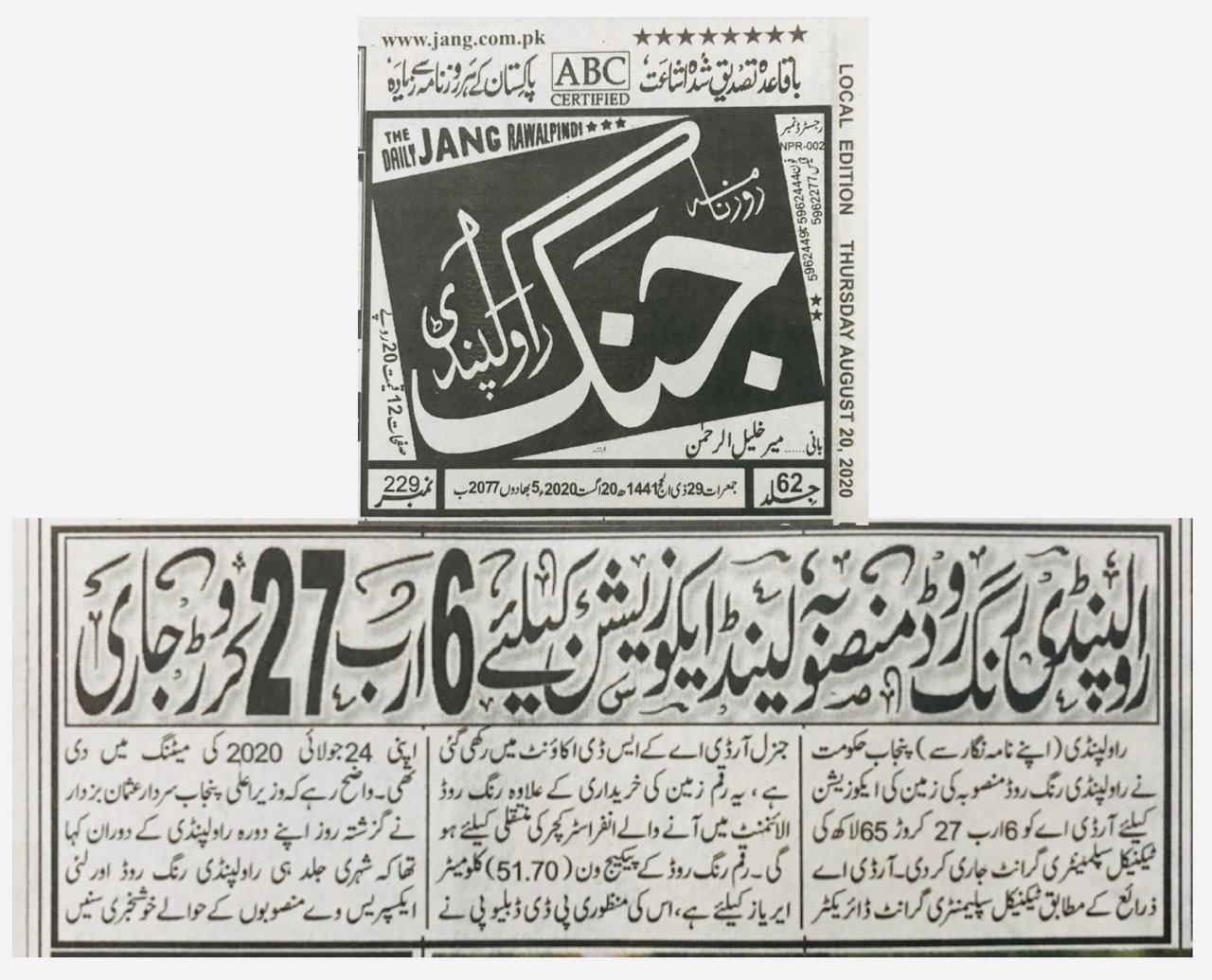 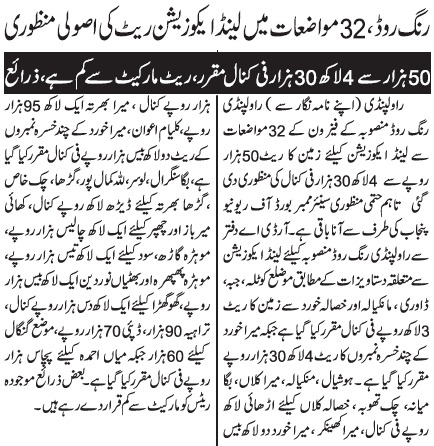 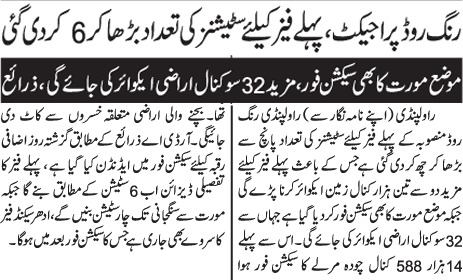 Rawalpindi: Federal Minister for Petroleum Ghulam Sarwar Khan recently said that Rawalpindi Ring Road (RRR) project would not be confined to the city alone but stretch over 100 kilometres to encircle both Islamabad and Rawalpindi, a news source reported. As per the publication, the project is expected to accommodate 50,000 vehicles on a daily basis.

The minister stated that the RRR would start from Chani Sher Alam near Rawat and end at Thalian in Rawalpindi – near the motorway. About half of the total length of RRR, which is from Rawat to Thaliyan interchange, is located in Rawalpindi, while the remaining road passes through the capital city – ‘covering Shah Allah Ditta, Siri Saral, Margalla Road, Kohsar, F-series sectors, Bhara Kahu, and Kallar Sayedan’ – before returning back to Rawat in Rawalpindi.

Sarwar Khan said that the said project would take two years to complete.

Previously, the authorities had formed a Project Management Unit (PMU) to manage and oversee the development of RRR. To this effect, Zeeruk was employed to prepare PC-1 of the project and execute its feasibility report. The project is a joint venture of Engineering General Consultant and Zeeruk. The Punjab government earmarked PKR 10 million for conducting the feasibility report.

Commissioner Rawalpindi has been assigned the job of the project director, while a deputy project director and the remaining staff including engineers, land acquisition collector, and resettlement planner will be employed in the coming days. Once the consultant firm finalise the PC-1 and present it to the government, the land acquisition and other relevant procedures will commence.

RAWALPINDI: The working on a proposal to divert the $400 million loan granted for the Ring Road project to the Leh Expressway is underway by the divisional administration announced Commissioner Capt (R) Mohammad Mehmood after a meeting held to review progress on mega development projects in Rawalpindi.

The decision came after many investors showed interest in constructing the Ring Road on a build, operate and transfer (BOT) basis, the meeting was informed.

Prior to this, a consultant had been hired to conduct a study and prepare a feasibility report within a month for the Ring Road project to be built on a BOT basis to be presented to the provincial government.

The proposed report regarding the alignment of the Rawalpindi Ring Road will originate from Channi Sher Alam Bridge on the G.T. Road near Rawat and terminate at the Thalian interchange on the M-2 motorway between Rawalpindi and Lahore near the Islamabad International Airport.

He said a complete design would likely be completed by the end of March and work would be started soon as the administration has been directed to initiate the land acquisition work.

In addition, instructions to launch surveying of traffic on Airport Road and the District Courts Square have been given to the Rawalpindi Development Authority (RDA) to determine whether a flyover or an underpass would be an apt choice on Ammar Chowk.

RDA’s traffic engineering and urban planning departments will begin the survey next week.