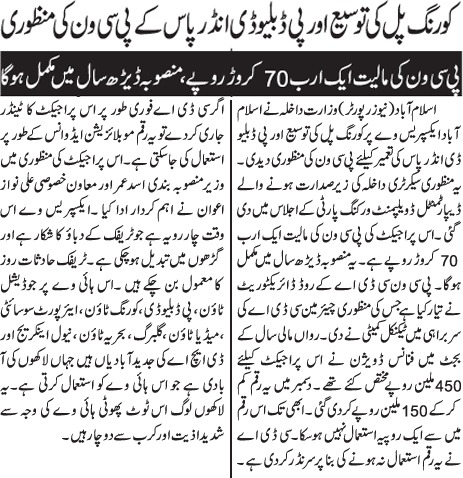 Islamabad: The Interior Ministry’s Development Working Party (DWP) on Monday approved the PC-I for the Capital Development Authority (CDA) to expand theKorang Bridge and construct the P.W.D underpass on the Islamabad Expressway, according to news sources.

Special Assistant to Prime Minister on CDA Affairs Ali Nawaz Awan said that the authority will launch the bidding process after the CDA-DWP meeting takes place and the meetings minutes are issued.

Mr Awan said that the project will resolve the traffic bottleneck issues in the areas of P.W.D and Korang Bridge on Islamabad Expressway. As per the approved PC-I, the project is estimated to cost PKR 1.7 billion, but the DWP has directed CDA to bring the cost around PKR 1.6 billion.

Furthermore, the upcoming Public Sector Development Programme (PSDP) will provide funding for the project. In the existing fiscal year, the government had provided PKR 450 million for the overall expansion of the Expressway – which was not executed. These funds will now be utilised for the expansion of the Korang Bridge and PWD Underpass development project.