IHC sets aside 200pc increase in property tax in Islamabad 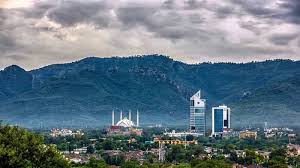 ISLAMABAD: The Islamabad High Court (IHC) on Wednesday set aside the notification of 200pc increase in property tax in the federal capital and ordered audit of the amount recovered by the Capital Development Authority (CDA) under the head.

The court also ordered that the amount recovered should be transferred to the Metropolitan Corporation of Islamabad (MCI).

The CDA, on the other hand, decided to challenge the order before the two-member division bench.

IHC single member bench comprising Justice Mohsin Akhtar Kayani announced the decision on identical petitions, including the one filed by Jamaat-i-Islami Naib Emir Mian Mohammad Aslam against the increase in property tax by the MCI and CDA.

The petitioners said the corporation had misused its power while making 200pc increase and requested the court to set aside the raise.

The MCI approved the increase in property tax last December, making it applicable from July 1.

The revenue directorate was part of the CDA but was devolved to the MCI after formation of the local government in 2016.

Orders audit of amount recovered by CDA from Islamabad residents

The corporation revised property and water taxes, both of which were being deposited into CDA accounts because the bills were to be paid to the “directorate of revenue CDA”.

There was tension between CDA and MCI over collection of the property tax. However, the court ruled that under the Local Government Act, the MCI had been empowered to collect taxes.

The outgoing mayor, Sheikh Anser Aziz, had also petitioned the court, seeking to stop CDA from collecting the property tax.

On the other hand, the civic authority in a written reply said that MCI lacked the capacity to utilise already collected revenue of over Rs1.5 billion, adding that the additional tax recovery would eventually make CDA incapable of carrying out essential civic service.

The CDA’s counsel told the court that the above mentioned amount was transferred to the MCI which was recovered through the auction of billboard sites and other commercial activities of the Directorate of Municipal Administration (DMA).

Advocate Hafiz Arafat Ahmed argued before the court that as per the requirements of Section 118 of the Local Government Act 2015, the MCI was required to frame its by-laws and rules. However, despite the lapse of almost four years, it could not undertake the exercise and in the absence of proper rules, Rs1.5 billion already lying in the accounts of the MCI (collected largely through the Directorate of Municipal Administration) have not been utilised for the welfare of the residents of Islamabad.

He said complying with the spirit of the 2015 Act, CDA transferred around 12,000 employees to the MCI. After the transfer of the employees, it was the responsibility of the MCI to bear all their liabilities, including salaries. However, the corporation never fulfilled its responsibilities and shifted the burden of payment of salaries to CDA.

Consequently, the civic authority, to avoid any interruption in services to the residents of Islamabad Capital Territory, started making payments on account of salaries of the transferred employees.

In addition thereto, some other liabilities of MCI were also borne by the CDA.

He argued that the corporation had so far received billions of rupees from the CDA and the quantum of amount which the people of Islamabad paid on account of property tax was only a fraction of the amount which CDA had given to the MCI.

A huge amount of the CDA is outstanding against the MCI and a direction needs to be issued to the corporation to have its accounts reconciled/settled with the civic authority. 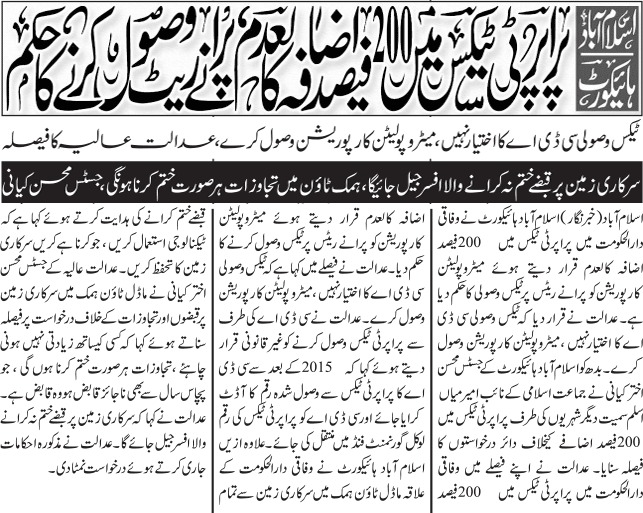