Eastern Bypass to be constructed from Bhara Kahu to Rawat 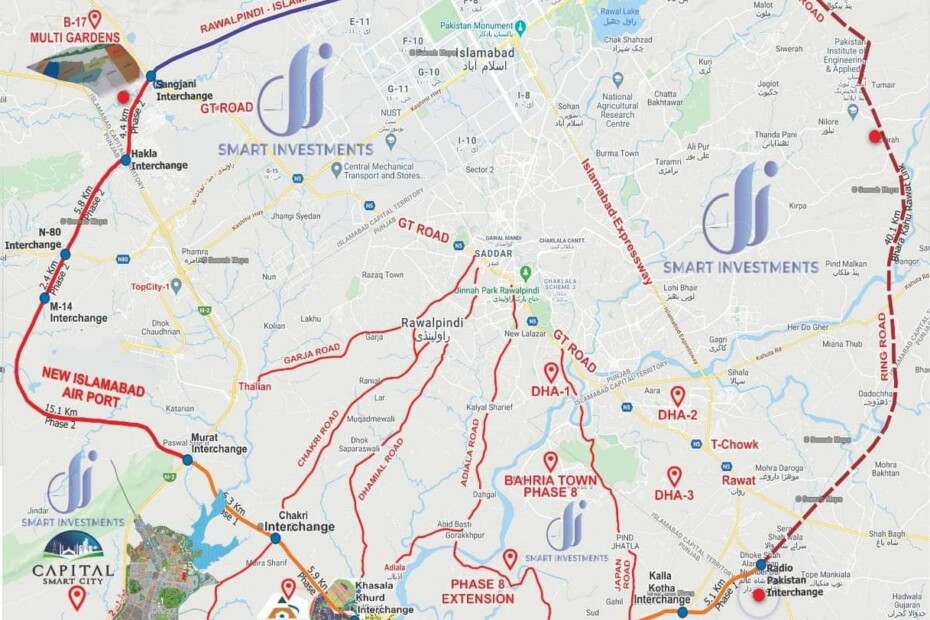 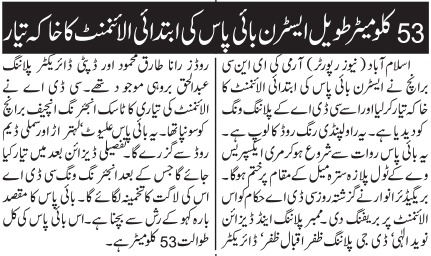 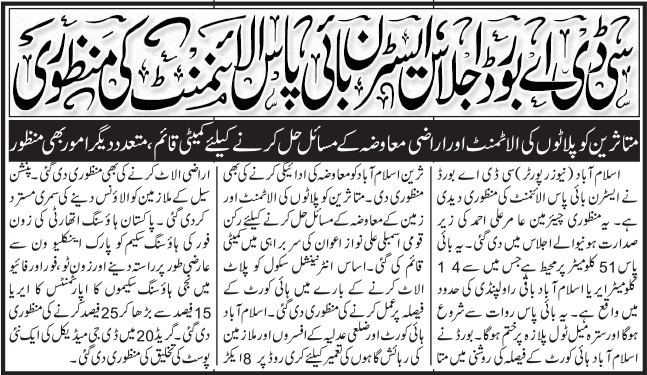 ISLAMABAD-The Capital Development Authority (CDA) board on Friday gave approval for the engagement of Engineering and Chief Branch of the General Headquarters to conduct feasibility service for the Eastern Bypass of Islamabad.

The board meeting was held at CDA headquarters on Friday which was chaired by the Chairman CDA Amir Ali Ahmed.

The board has allowed the planning wing to sign an agreement with Engineering and Chief Branch of the General Headquarters to get their consultancy services to determine the alignment of eastern bypass of Islamabad and conduct a feasibility study in this regard.

According to details, the said bypass would provide an alternate route to the traffic coming in and out from Murree and Azad Jammu and Kashmir while it would also be linked with the purposed ring road of the Rawalpindi.

The project would also reduce traffic pressure from the existing road of capital city including the Islamabad Expressway.

Senior officials informed that the eastern bypass will start from Bhara Kahu and end somewhere near to Rawat on main GT Road. It has been envisioned that the said corridor would be comprised of three-lane highway having about 300 feet wide right of way.

ISLAMABAD: The Capital Development Authority (CDA) has begun working to finalise the alignment of the proposed southeastern bypass from Rawat to Bhara Kahu.

The 40 kilometre, 600 feet wide road will begin at Rawat and connect to Murree Road near Bhara Kahu, crossing the Defence Housing Authority’s developments, Nilor and Tumair. The military’s Engineer-in-Chief branch hasbeen working with the CDA on the alignment and design of the road.

Sources said that the Engineer-in-Chief branch gave a presentation to the CDA on Monday on the road’s proposed alignment. The branch has been working on the road’s alignment at the authority’s request, they said.

A CDA officer said: “Monday’s meeting was a formal meeting in which the E in C branch gave us an initial presentation. A lot of detailed work on the alignment of the road has yet to be carried out.”

Once built, the road will help reduce traffic on Murree Road, Kashmir Highway and other major roads, he said, as traffic to and form Kashmir will use this bypass road to reach the G.T. Road in Rawat.

The large population in Zone IV and V, where a number of housing societies have already been built, will also use this road, reducing the burden on other roads in the capital as well, he said.

The officer said that last November, the cabinet, while approving an interim report prepared by a commission formed to revise Islamabad’s master plan, approved the construction of this road as well.

The officer said that Federal Cabinet headed by Imran Khan in November last year, while approving an interim report prepared by a commission formed for revision of master plan of Islamabad, had approved construction of the said bypass road.

He added that this road will work as sort of a ring road, starting from Rawat and crossing Zone IV and V from the rear of DHA, Nilor and Banigala, before connecting to Murree Road near Bhara Kahu and the proposed Margalla Avenue, which begins in Sangjani, and connecting to a ring road being constructed by the Rawalpindi authorities.

The proposed Margalla Avenue divided Zone III to its north from Zone I and II to its south. Under the master plan, it would begin at the G.T. Road near Sangjani, pass through the foothills of the Margallas to Constitution Avenue and onwards to Bari Imam and Bhara Kahu, where it would connect to Murree Road.

The CDA began constructing a portion of this road from the G.T. Road to D-12 seven years ago, only to abandon the project after the initial earthwork.

When contacted, CDA Member Engineering Dr Shahid Mahmood said that the Engineer-in-Chief branch gave a presentation to the CDA to discuss the initial and rough alignment of the southeastern bypass.

“They discussed two ideas for the alignment of the road with us, so nothing has been finalised. Rather, it was an initial meeting,” he sadi, adding that the branch has expertise in engineering, which was why the CDA engaged them to finalise the road’s alignment and design.